The Best Transit-Friendly Hikes Near Vancouver

Vancouver’s proximity to the local mountains and numerous park areas means there are many great hiking options for those who depend on taking the bus. The North Shore offers some of the best hiking and more convenient transit accessible routes from the downtown Vancouver area. We’ll discuss some of the best transit-friendly hikes near the city and include several trails in North and West Vancouver, as well as east around the Buntzen Lake area.

Note: Please double check any transit routes with Translink as routes, schedules, and bus numbers do change and the Translink website will have the most up-to-date information. Visit the list of trails for a complete list of Transit-Friendly hiking trails.

The nice thing about taking the bus to do a section of the Baden Powell is the trail is best done going one-way, so you will start at a different spot then where you end. The section of the Baden Powell Trail between Lynn Valley and Deep Cove in North Vancouver is one of the North Shore’s best trails and particularly nice to hike during the spring when all of the little streams along the route are flowing with water. A tip is to take the bus to the Lynn Canyon Suspension Bridge and start the trail there, heading east in the opposite direction from the website description (Vancouver Trails says to start in Deep Cove). The added bonus to this hike is you also hike the popular Quarry Rock Trail, which is part of Baden Powell Trail’s eastern most section. Ending in Deep Cove is nice because there are more nearby cafes and places to eat before catching a bus back to the city.

Transit Directions: Take the Seabus from Waterfront Station to Lonsdale Quay. At Lonsdale Quay, take bus #228: Lynn Valley and get off the bus after Lynn Valley at Peters Road. You will have to walk along Peters Road to get to the Suspension Bridge. Cross the Suspension Bridge and go right, follow the trails and the “BP” (for “Baden Powell”) markers.

From Deep Cove, to return to Vancouver, take bus #209 or #210 to Phibbs Exchange. Transfer to #211 or #212, both of which cross the 2nd Narrows and return to downtown Vancouver. 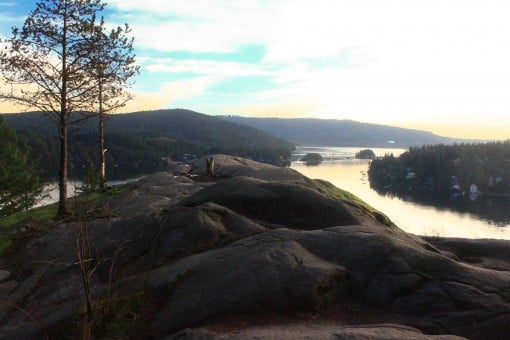 The view from Quarry Rock along the Baden Powell Trail near Deep Cove.

Located along the scenic shores of West Vancouver, Lighthouse Park has a network of hiking trails that are accessible year-round. The Valley Of The Giants Trail and the Arbutus Trail pass through the lush west coast rainforest before reaching the iconic lighthouse. The Shore Pine Trail follows the coast, passing several incredible viewpoints looking out towards Howe Sound, Burrard Inlet, Bowen Island, and back towards the city of Vancouver.

Transit Directions: From the Georgia and Seymour area in Downtown Vancouver, take Bus #250: Horseshoe Bay / Dundarave as it heads out of Vancouver, across the Lions Gate Bridge, and into West Vancouver. The bus passes the busy Park Royal Shopping Mall and follows Marine Drive west. You need to exit the bus at Beacon Lane and walk along Beacon Lane, into Lighthouse Park. Ask the bus driver if you are uncertain, it can be difficult to predict this stop. You will return to the city by taking the bus back along the same route. 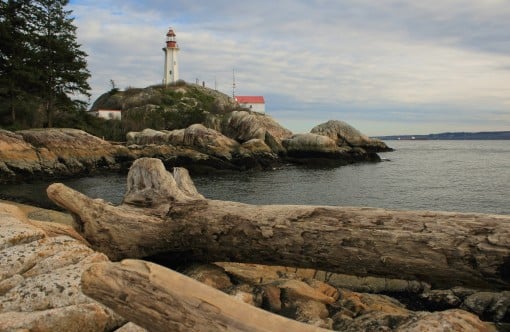 The view of the Lighthouse from West Beach in Lighthouse Park in West Vancouver.

The Brothers Creek Loop follows trails above the British Properties in West Vancouver and below Cypress Mountain. The scenic, forested trails pass a large old tree and two waterfalls. A short side trip from the bridge crossing at the top of the Brothers Creek Loop can be done to either Blue Gentian Lake or Lost Lake. The hike is best done in the late-spring, summer, or early fall as snow tends to linger in the forest at the higher elevations.

Transit Directions: From the Georgia and Seymour area in downtown Vancouver, take bus #250: Horseshoe Bay / Dundarave across the Lions Gate Bridge and into West Vancouver. Exit the bus at the Park Royal Shopping Center. Look for Bus #254: British Properties and, as you get on the bus, tell the bus driver that you would like a reminder to get off the bus at Eyremount Drive and Crestline Road (it will be nearly impossible to know when to exit the bus).

A waterfall near the top of the Brothers Creek Loop.

The Capilano Pacific Trail is a great transit-friendly route because it is best completed hiking in one direction. It’s easiest to do this route walking downhill, so you’ll want to start at Cleveland Dam, hike through the Capilano Canyon area and the continue follow the river, eventually arriving at Ambleside. From there, you can enjoy Ambleside’s Beach, continue walking along the Sea Wall in West Vancouver, or have something to eat along Marine Drive in West Vancouver, before catching a bus back to Vancouver.

Transit Directions: From downtown Vancouver, start your hike from Cleveland Dam in North Vancouver by taking the Sea Bus from Waterfront Station to Lonsdale Quay. Transfer to bus #236: Grouse Mountain and ask the bus driver to stop near Cleveland Dam. About 10-minutes after passing the Capilano Suspension Bridge, get off the bus near Cleveland Dam. Cross the street and walk into the park towards the dam.

From the Ambleside area, walk to Marine Drive by crossing the train tracks and walking one-block up to the main street. Look for a bus stop where the bus is heading east and take bus #250 or #253. Either bus passes Park Royal, then crosses the Lions Gate Bridge into Vancouver along Georgia Street. 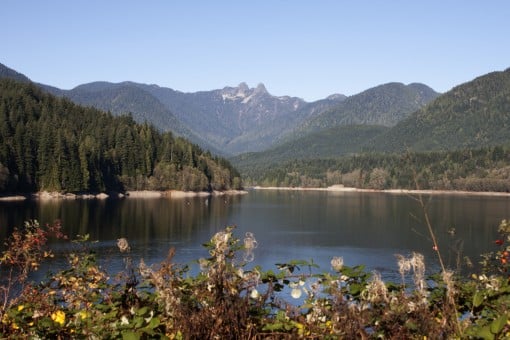 A view of the Capilano Reservoir near Cleveland Dam.

The trail to the Big Cedar and Kennedy Falls is a rugged hiking trail that is located on the east side of Mount Fromme and starts from the top of Mountain Highway in North Vancouver. The trail first reaches a massive cedar tree, which shows the enormous size of what the trees used to be before logging decimated the area. Further along the route is the waterfall of Kennedy Falls, which drains from he Kennedy Lake watershed area above.

Transit Directions: From downtown Vancouver at Granville and Pender, take bus #210. Tell the bus driver you would like to exit the bus at the top of Mountain Highway. The bus passes through East Vancouver, across the 2nd Narrows Bridge to Phibbs Exchange, then begins heading up Mountain Highway. After passing the Lynn Valley area, the bus heads up the steep section of Mountain Highway and you will need to exit at the highest bus stop, which is near Coleman Street. Walk the rest of the distance up Mountain Highway to the start of the trail. You will also return to this point and get the bus back to the city from the other side of the street. 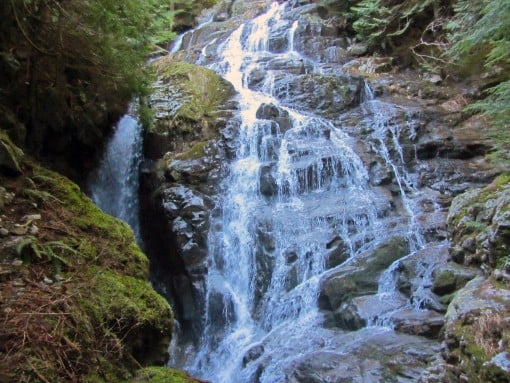 There are lots of hiking trails in Lynn Headwaters Regional Park, including Lynn Loop, Rice Lake, and the very difficult Hanes Valley, however one of the most popular is the hike to Norvan Falls. The route is not too difficult as it follows a trail along Lynn Creek. You can decide whether to add any additional trails onto your route, like Lynn Loop, to make a slightly different route for hiking to the falls and then returning. Norvan Falls is best viewed in the spring months when there is more water flowing over the rocks as it can be reduced to nearly a trickle in the later summer.

After exiting the bus, continue to walk up Lynn Valley Road and go right down a side road called Rice Lake Road. Do NOT cross the bridge, instead go left along Marion Road and then follow the trail at the end into the forest. Continue to follow the trail as it goes parallel to the Lynn Valley Road but is much safer to walk along (and much more beautiful). The trail will emerge at the last parking lot where the hike to Norvan Falls begins.

You will have to walk back to the same area along Lynn Valley Raod and get the bus at the same stop where you existed. The bus does a short loop through the neighbourhood and the bus driver takes a short rest before heading back in the opposite direction but along a slight different route. You can also walk about 6 blocks down Lynn Valley Road to get the same bus back to Vancouver, if you don’t want to wait for the bus driver to have a rest. 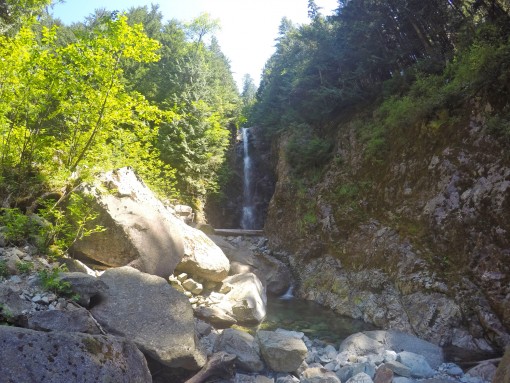 Located east of Vancouver, the Buntzen Lake area has a number of hikes, including the scenic Diez Vistas Trail that pass along the western mountains that offer scenic views of Indian Arm. After an initial uphill climb, the hike descends gradually along the Diez Vistas route before going right and reaching a suspension bridge at the north end of Buntzen Lake. After a rest at the beach near the suspension bridge, walk back along the Buntzen Lake trail to the crowded area of the park, where you can get the bus back home.

Transit Directions: Note that taking the bus to Buntzen Lake can take between 1.5 – 2 hours, depending where you get the bus from and whether the bus stops at the parking lot area in Butnzen Lake. The bus only stops at the parking lot area during the summer months, otherwise it stops outside the park, which means a 25-30 minute walk to the start of the trail. Double check the bus schedule for Buntzen Lake and make sure to return to the bus in time for the last one!

From downtown Vancouver at East Hastings and Granville, take bus #160: Poco Station as you head out of Vancouver, through Burnaby, and along the Barnet Highway to Port Moody. As the bus drives along St. John’s Street, get off the bus at Ioco Road. Cross the street and take bus C26: Anmore / Belcarra and tell the bus driver you want to get off the bus at Buntzen Lake. The bus will weave through the region before getting to the Buntzen Lake, and hopefully driving into the parking lot area.

Located on the west side of Vancouver near UBC, you don’t have to go far to experience some scenic trails. The The Pacific Spirit Regional Park area is quite large as trails exist off of 4th Avenue, 10th Avenue, 16th Avenue, Southwest Marine Drive, and even the coast and beaches to the west of UBC, including Tower Beach and Wreck Beach. A good part of a day can be spent on these trail but it does require a bit of planning as you may enjoy starting your route along some forested trails off of 16th avenue and hiking around to some beaches for lunch, then returning via the Jericho Beach to 4th Avenue or Broadway for dinner. Bring a map for this one.

Transit Directions: There are lots of options, depending where you are getting the bus from and where you want to start. From downtown Vancouver to the trails along 16th Avenue, take the Canada Line Skytrain south and get off at King Edward Station. Take bus #33: UBC Westbound as it follows 16th. Get off the bus as you pass fields at Camosun Park and begin hiking the trails on either side of 16th.

Again, there are plenty of options and it’s best to come up with a bit of a plan before arriving at Pacific Spirit Regional Park.

Have you taken transit to any hiking trails? What has been your experience?