How about a little bird watching while you’re hiking? One misconception about bird watching is it means sitting still in a bird blind (definition: a shelter used for observing wildlife) for hours with your binoculars. However, this is not true as there are plenty of examples of birds along the trails of Vancouver, such as the Great Blue Herons. With their long beaks, long legs, and large wing span, they are easy to spot and often don’t flutter away as soon as you have them in sight. The Great Blue Herons can be spotted throughout the region, including near fairly urban areas like Stanley Park.

The majestic birds can be seen standing in solitary near a creek, lake or shore, patiently waiting to strike for their prey. Everything changes in spring when they get together in large colonies where they build nests, mate, lay and incubate eggs and feed the growing youngsters. This spectacle is happening right under (or above) our noses. A terrific example is the Stanley Park Colony where about 86 active nests are located right above the tennis courts. 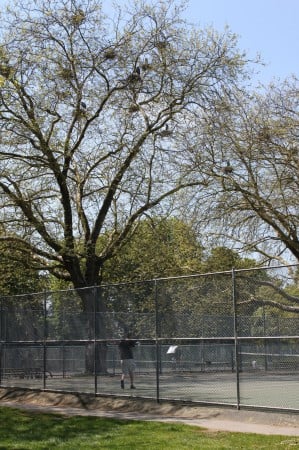 In March, they return to the colony and start building their nests in the trees. Mating rituals are carried out with lots of neck stretching and clapping of the beaks, fluffed feathers and mating calls. The females need to eat a lot to prepare so the males stay on the nest for most of the day. Most herons are monogamous but will select a new mate each year. Both parents share the burden of nest making, incubating and feeding the young. The Stanley Park Ecology Society estimates that 169 young herons fledged from the colony in 2012. Unfortunately, less than half of those are likely to survive to breeding age. 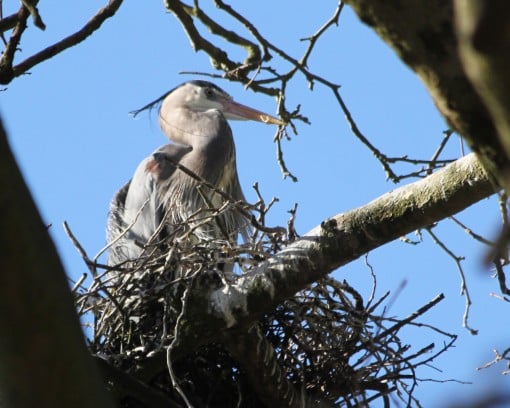 A Great Blue Heron in a nest in Stanley Park.

The species of great blue herons in this part of B.C. is a unique subspecies that doesn’t migrate, but stays here year round. They are considered to be a species at risk in British Columbia mainly due to loss of habitat. The Stanley Park colony seems to thrive so close to urban development but these unique circumstances are not found everywhere. 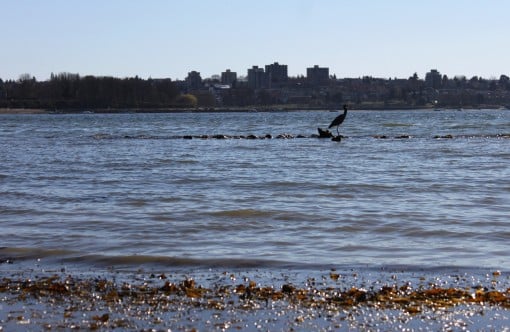 A Great Blue Heron stands on a rock along English Bay in Vancouver.

Another easily observed heron colony while hiking can be found at Colony Farm in Coquitlam where about 110 nests are located in this Wildlife Management Area.

For more info on herons in Stanley Park: http://stanleyparkecology.ca/conservation/urban-wildlife/herons/

Linda Bakker is the Team Leader of Wildlife Rehabilitation at the Wildlife Rescue Association of BC. The Wildlife Rescue Association is the largest urban rehabilitator of wildlife in British Columbia. Each year, WRA's Care Centre admits about 4,000 injured, orphaned and pollution-damaged wildlife. WRA also teaches people how to co-exist with wildlife by operating a wildlife help-line and education programs for kids and adults.