A small island located in the Fraser River between Surrey and Pitt Meadows, Barnston Island offers a wonderful family outing best done as a bike ride. Visitors can park in the large parking lot near the ferry and cross to the island by foot or with their bicycles.

Following the road that loops around the island is a popular family bike ride as the route is flat, 10km long, and has a couple of scenic viewpoints along the way to stop at. It’s possible to walk around the island but it’s best done as a bike ride due to the distance.

Pack a picnic and plan to stop at the two points of interest, Mann Point and Robert Point. The time it takes to do the 10km loop depends on how quickly you bike and how long you stop for, however it’s worth it to budget anywhere from 2 – 3 hours to give yourself time to enjoy the views and, particularly if you have younger children cycling the route.

If you cycle around the island in a counter-clockwise direction (go right after departing the ferry), you’ll ride through the Katzie First Nation community. At the furthest eastern point on the island, there is a trail off to the side with a wooden sign post with green Metro Vancouver signage. This trail heads into the forest and is only a short distance to Mann Point, where there is a lovely, sand beach along the Fraser River. The view looks directly at the Golden Ears Bridge and you can see the passing tugboats pulling log booms and barges. This is a great place to stop for children as it’s a nice distance from the ferry and a nice beach to have a play on before continuing the bike ride. 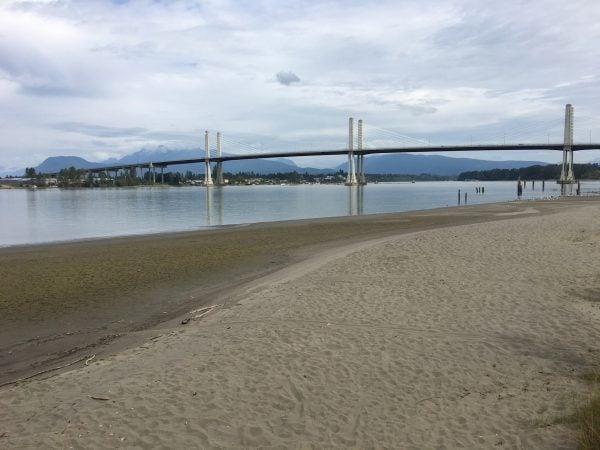 The beach and view of the Fraser River from Mann Point on Barnston Island.

Continuing along the north end of the island road, the route is still flat and easy going. At the far northwestern tip of the island, a trail heads into the forest to a few picnic tables. A small trail next to the picnic area goes down to the water at Robert Point, offering a scenic view of the Fraser River looking downstream. This park area is managed by Metro Vancouver and there are garbage cans and toilets located near where the trail leaves the road. 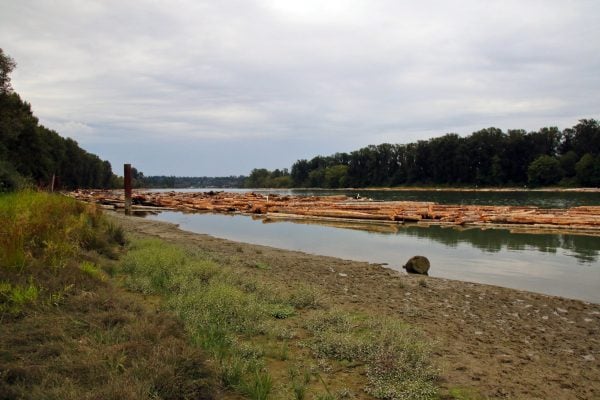 A view of the Fraser River from Robert Point on Barnston Island.

After enjoying the views at Robert Point, head back to the road and continue in the counter-clockwise direction until a short time later, you return to the ferry.

Please keep in mind that, while it might be tempting to walk to the water near the road, most of the island is private property. Stay on the roadway and enjoy the areas at Mann Point and Robert Point.

The ferry to the island is free and parking is also free. If the parking lot is full, there is additional parking in the neighbouring Surrey Bend Regional Park that is a short walk to the ferry.

The ferry only holds a few cars as it’s a small barge fastened to a tug boat. Vehicles have to back on and off on the Barnston Island side, so be sure to watch the ferry staff’s direction and board and depart the ferry when instructed to do so. The crossing takes only 5-minutes and you never have to wait long for the next ferry to return. 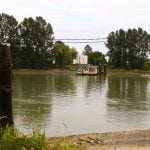 Looking across the Fraser River at the Barnston Island ferry 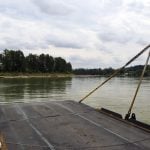 The front loading ramp of the Barnston Island Ferry

Getting To Barnston Island

To get to Barnston Island from Vancouver, drive east along Highway #1 and cross the Port Mann Bridge. Take Exit #53 176th Street. After exiting, stay to the left lane and then turn left at the lights, crossing over the highway. Drive down the hill in the right lane and exit heading towards 104 Avenue East. When you reach the Golden Ears Connector (the first street), you need to go straight and towards the train crossing. This is the confusing part as it’s not a perfect straight through the intersection, you’ll need to make a quick right, then a quick left. Once you cross the train tracks, follow 104th Avenue right to the Fraser River and parking in the large gravel parking lot to the left of the ferry.

It’s possible to take transit to Barnston Island but the closest the bus gets to the Barnston Island ferry is about 2.5km away at the intersection of 104th Avenue and 168th Street. To reach this point, take Bus #335: Newton / Surrey Central Stn to the Newton Exchange. Once there, transfer to Bus #337: Fraser Heights / Guildford / Surrey Centre and take this bus to the last stop, which is 104th Avenue and 168th Street. From this intersection, follow 104th Avenue east for about 2.5km until you reach the Fraser River.

A view from the picnic area at Robert Point. 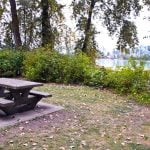 A picnic table at Robert Point.

A view looking down the Fraser River from Barnston Island 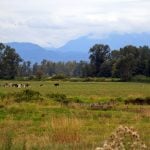 Cows in the fields on Barnston Island 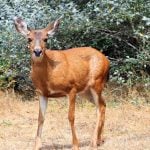 We were lucky to spot a deer on Barnston Island