A New Hiker’s Guide For The Vancouver Area

We hear from lots of people who have moved to Vancouver and are wondering what trails they should hike. In addition, there are many who go for local walks but want to get out and explore longer hikes on the local mountains.

This will hopefully serve as a starter guide for the south western British Columbia area and give you an idea of the terrain, the safety precautions to take, as well as what goals to set. This guide may also help those looking to get beyond the common North Shore trails and explore some of the areas closer to Whistler in Garibaldi Provincial Park.

The Terrain and Safety

The terrain is mountainous, rugged, and can be dangerous if not prepared. The North Shore Mountains, for example, while close to the city can give a false sense of security as there have unfortunately been an increase in the number of people lost in the past number of years. Cellular phone access that we would normally take for granted does not work  a mere kilometer or two into the mountains in many areas and you can expect that the majority of trails on this website will no have cell phone access. 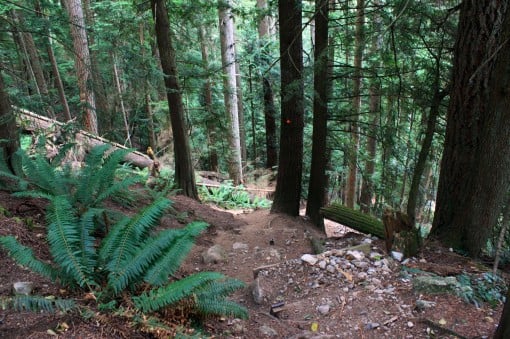 The steep terrain along the Baden Powell Trail, between Skyline Drive and Grouse Mountain, in North Vancouver.

Always tell someone where you are going, when you plan to be back, and never hike alone. You can refer to the Safety section for more details on what to bring and a blog post about Hiking Groups in Vancouver for information on joining a group to hike with others.

While it’s important to follow these safety tips, you can also work to build up your physical fitness on some shorter trails that are closer to the city before venturing out and trying the more challenging, longer ones. This will help give you the experience of the local terrain and what to expect.

The best tip for getting out of the city and trying different trails is to set a goal to do one of the most spectacular hikes in the region. It’s no secret that many people love Garibaldi Lake and several of the other trails within Garibaldi Provincial Park. From talking with other hikers over the years, and myself included, what got me hooked on hiking in the area was Garibaldi Lake and being able to see such incredible scenery in our own backyard.

With great reward comes great challenge as most of these trails are rated difficult, with some of the longer routes being considered very difficult or multi-day hikes. Due to the high elevation, another issue is these trails are snow-free for only a few months of the year, generally July – September, with the best time to hike them in late-July or early-August when the wild flowers are in bloom and daylight hours are at their peak.

Here is a list of some of the favourite and most popular summer hiking trails:

Black Tusk (Whistler) – A long, steep hikes near Garibaldi Lake that takes you up the loose shale to one of the areas most poignant rock.

Panorama Ridge (Whistler) – A very long hike, the trail leads to a ridge that overlooks Garibaldi Lake far below. 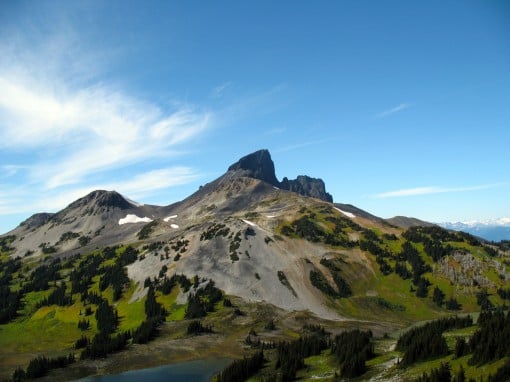 The view of Black Tusk taken from the trail heading up to Panorama Ridge in Garibaldi Provincial Park.

Elfin Lakes (Squamish) – A gentler hike than some other in Garibaldi Provincial Park with two small, scenic lakes.

Wedgemount Lake (Whistler) – One of the steepest hikes but once you get over the top section that feels like it’s straight up, the alpine terrain, glacier, and turquoise lake are an incredible site.

Joffre Lakes (Pemberton) – A long drive from Vancouver, the hike past each of the 3 lakes is worth it.

The Lions (Lions Bay) – A long steep trail that takes you to the two famous peaks that are visit form the city of Vancouver.

Mount Cheam (Chilliwack) – Getting up the extremely rugged road that is only accessible by 4×4 is most of the battle but the reward is a 360-degree view of the Fraser Valley on a clear day.

The view from the top of Mount Cheam in Chilliwack, BC.

There are many more great hiking trails but these are some of our favourites and also some of the most loved trails we hear about from other hikers.

Before taking on these longer hikes, start training and start early in the year. Look at the list of hikes and see what trails a nearby and accessible in the spring. You might be surprised at some of the trails that are close to home.

Use the following trails as a “test” to whether you are ready for some of the longer hikes: 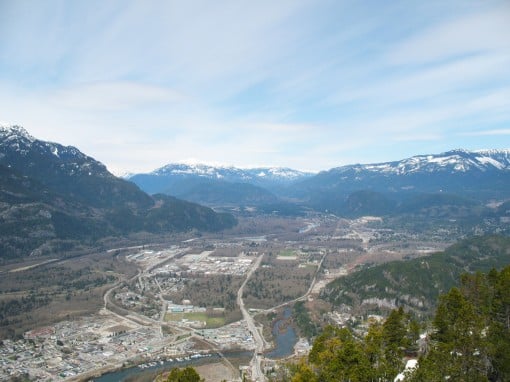 View of Squamish from The Chief

One of the best hikes to test your endurance for these longer hikes is The Chief in Squamish. The trail to the Chief resembles the Grouse Grind, however you also have to hike back down, which can often be more challenging on the legs when you’re not used to it. Also, the Chief has three peaks and each can be easily visited in a day. The Chief is one of the first trails with serious elevation gain to become snow-free with it often being accessible in mid to late-April.

A view of Deep Cove from Quarry Rock along the Baden Powell trail in North Vancouver.

The Baden Powell Trail is also a great option for training as the North Vancouver section is accessible for most months of the year. The West Vancouver section goes up and over Cypress Mountain and usually has snow until well into June. However, the terrain along the route from Deep Cove to Lynn Headwaters Regional Park offers a variety of terrain, not too steep, but a fairly long day hike for the spring months.

The Grouse Grind and BCMC Trail are also great for training, however they usually don’t become snow-free until June. If you’re doing one of these trails in July in preparation for a longer hike, it would be best to continue hiking to Goat Mountain and then return back to the Grouse Gondola to work up the extra endurance.

You can pretty much take your pick from the trails list for training for the longer hikes but the ones mentioned above are good indicators as to whether you’re ready for one of the longer hikes.

Since the trails to Black Tusk and Panorama Ridge take 10-hours or so to do in a day, a lot of people prefer to camp at either the Garibaldi Lake campsite or the Taylor Meadows campsite and then do these other trails the next day.

Another popular camping option is to Elfin Lakes where you can either stay in the Hut (if there’s room) or setup a tent further past the lakes. Camping here will allow you to explore further hiking destinations, such as The Gargoyles or Opal Cone.

One of the challenges can often be finding other like-minded people who are also interested in hiking and exploring the trails of the local mountains. The best place to start is by signing up and joining one of the local hiking groups who plan multiple outings each year. These groups also have others interested in exploring the outdoors and doing so in a group will also help you get over the initial hurdle of going beyond some of the common hiking trails.

You shouldn’t feel as though you have to hike all of the trails in one year. The first year, try some easier trails in the late spring and then do The Chief and see how that goes. If The Chief goes well, then try one of the more challenging trails in Garibaldi Provincial Park.

Hiking should be fun and to make sure you have an enjoyable time, set a goal of doing a memorable trail, hike with others, and train for the longer hikes so you don’t feel as though you’re struggling to “get there”.