Located along the mighty Fraser River, Alexandra Bridge served as an important link connecting the Cariboo region to Fort Langley. Today, the old Alexandra Bridge (the 2nd one built) provides a place for visitors to the area to stop and see an important piece of history in the area while also enjoying the incredible views of the Fraser Canyon. 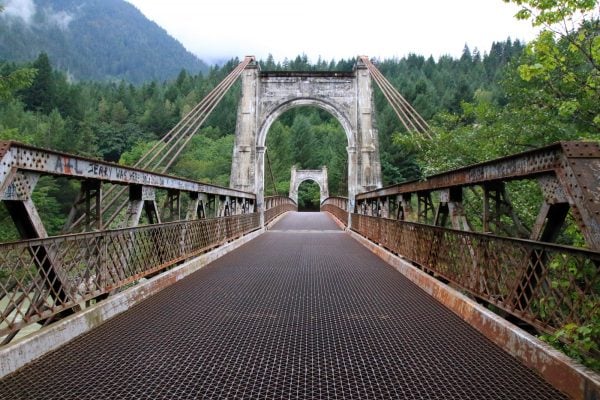 Alexandra Bridge along the Fraser Canyon.

Alexandra Bridge Provincial Park has several picnic tables and outhouses. The trail to the bridge is about 500-metres each direction, with a gradual decline. The trail follows part of the old road before the modern day highway was built.

There were plans in the 1840’s to connect New Caledonia with Fort Langley. New Caledonia refers to the central and northern section of current day British Columbia before BC became a Province in 1871. The area was a district of the Hudson’s Bay Company, used for fur trading, and the original need was to build a trail connecting this region to Fort Langley, which was an important trading and shipping hub at the time.

In 1858, a ferry service was established that connected the east and west shores to be used throughout the Gold Rush era. With more people flocking to the area during this period, it was a clear that a bridge was needed.

View of the Alexandra Bridge from the west side of the Fraser River.

Led by Joseph Trutch, the first road bridge was constructed in 1861 and was part of the Cariboo Wagon Road that stretched from Yale to Barkerville. The construction of the road through the Fraser Canyon was a difficult task and, at the time, a major engineering feat. Much of the difficult and dangerous work along the route was done by First Nations and Chinese workers, many who lost their lives. The bridge was named after Princess Alexandra of Wales.

The Fraser Flood of 1894 destroy the original bridge and the structure was never rebuilt. In the 1880’s, the Canadian Pacific Railway was built through the treacherous sections of the Fraser Canyons and several sections of the Cariboo Wagon Road were used for the tracks.

In the 1920’s, the rise of the automobile saw the Province of British Columbia invest in the construction of the new Cariboo Highway through the Fraser Canyon. The second Alexandra Bridge was built across the river, enabling vehicle traffic to pass through the area. The suspension bridge is still the same one that exists today today, although it was closed to traffic in 1964 after the Ministry of Transportation built the third Alexandra Bridge.

A view from the Alexadra Bridge looking down the Fraser River towards the modern-day highway bridge.

Alexandra Bridge Provincial Park was established in 1984 to provide access to the second bridge. The park provides a timely location for a rest along the driving route through the Fraser Canyon and the trail is just 500-metres in each direction. The bridge provides some magnificent views of the rugged canyon below as well as the steep cliffs that makeup the area.

Alexandra Bridge Provincial Park is located about 40km north of Hope and only 2km north of Spuzzum, just beyond the large bridge over the Fraser River. There is a fairly large parking lot, although the park can get busy during the summer months when many travelers pass through the area.

Sarah Loehndorf talks about some of the Bigger and Badder hikes, including Frosty Mountain, Needle Peak, Vicuna & Guanaco Peaks, and Sky Pilot.

If you’re new to hiking or looking for some easier trails, here’s a list of the 10 Best Beginner Hikes around Vancouver to explore.

A list of suspension bridges near Vancouver, Whistler, and in Southwest British Columbia along hiking trails with spectacular west coast scenery.

What Goes into Building and Maintaining a Hiking Trail?

Chris Ludwig from the BC Mountaineering Club discusses what goes into building and maintaining a hiking trail using the Watersprite Lake trail as an example.

In part 2 of his Trail Running series, Karl Woll of Outdoor Vancouver highlights some of the best trail running routes and breaks each route down by skill level as easy, intermediate, or pro.

These hiking trails provide some of the most scenic mountain views of Howe Sound between West Vancouver and Squamish. How many of these views have you seen?

If you’re planning a trip to Tofino or Ucluelet, pickup your free Trails of the West Coast guide to help you explore the incredible hiking trails in the region.

National Parks and Historic Sites in BC