The Best Trail Running Clubs and Races around Vancouver

This is the third and final post in a series on trail running for beginners around Vancouver. You read post one and I suckered you into trying out trail running. You read post two and discovered some great trails to train on. Now you’re ready to put all that training to the test and line up at the start line of a race with a whole group of  trail runners.

Your first race can be a little intimidating. You’re not really sure how the whole thing is going to go down and you might be worried about your fitness or otherwise embarrassing yourself. But here’s the good news; the trail running community is one of the friendliest groups of people around, and every race has runners of all abilities. No one takes it too seriously, and the guy (or gal) who wins the race is just as likely to give you a high-five as you cross the finish line as anyone.

So, where can you sign up for these races?

Here are the best local races to check out (along with a few training groups/ clubs you can join)!

The 5 Peaks Trail Running Series was my first introduction to trail running. I did a race at Mount Seymour and was hooked – on both the sport and this series.

The concept is simple – 5 Peaks wants you to ‘get off the road’ and they host a series of 5 races in a variety of regions around the country (and they are growing). Each race offers two distances: a Sport (short, ~6 – 10km) and Enduro (longer, ~12-18km). In British Columbia, the races are run on singletrack trails in a variety beautiful areas, ranging from Maple Ridge to Whistler. These races very beginner and family friendly. They even offer a free 1km race for the kids.

The CMTS launched in 2013. Like 5 Peaks, they have an amazing series of local races on some incredible terrain. Unlike (or perhaps not unlike) 5 Peaks races, the CMTS race directors take a particular satisfaction in your pain (and to be fair, also in seeing you smile once you recovered at the finish line). The courses are about the same distance as 5 Peaks races or slightly longer, but they designed to challenge you as much as possible on the given terrain.

Another great series of local trail races is put on by Mountain Madness. They host a diverse series of races, including two of my all-time favorites – the Dirty Duo and the Hallow’s Eve Trail race. These races are very much beginner-friendly and bring out a great crowd of smiling faces. The races all offer a variety of distances too, so you can slot into where you’re most comfortable.

Seek the Peak is a unique race, that takes runners from Ambleside Beach (sea level) to the peak of Grouse Mountain (4100ft climb) over 16km of trail. Many will be familiar with a particular 2.9km stretch of the course – the Grouse Grind. This may not sound like a good choice for your first trail race but you might be amazed by how much ground you can cover in a few short hours. Also, there is a 4-person relay option for this race which makes it very manageable if you can trick three friends into joining you. This race is run in June each year.

Club Fat Ass is a grassroots club based out of North Vancouver that organizes low-key running events. Each event is self-timed and self-supported and they usually offer a variety of distances. These events are about getting outside and doing something fun (trail running!) in a no-frills way. There used to be a membership fee, but now its free to attend. 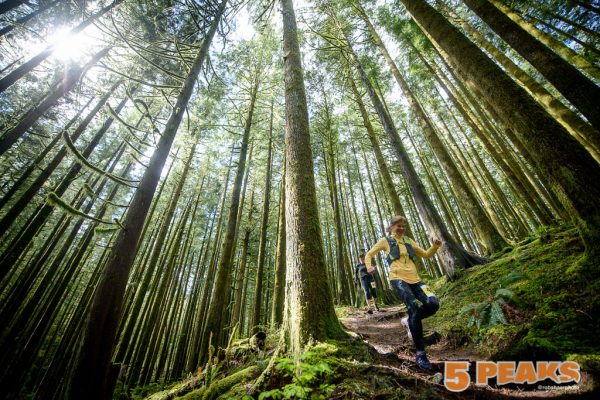 Groups and Clubs for Training

Ladies of the Trails

This is a free group for women in the lower mainland to connect and go on guided group runs, mostly on the North Shore, but in other areas of greater Vancouver as well. There are discussions about upcoming races, sales, products, tips, and training questions all in one place for the ladies.

Kintec offers a paid trail running clinic out of their North Vancouver and Port Moody locations, for both beginners and advanced trail runners.

A lot of trail races offer orientation runs. Typically, they are for the longer races like the 50km Knee Knacker or the Squamish 50 miler. However, you generally don’t need to be signed up for the race to join in, and there is a wide variety of skill levels. So if you are worried that you will be left in the dust of all the other runners, that is never the case and you usually have a group of people around your ability to stick with during the run. Finding a few of these is a great way to meet some new people and become familiar with new trails.

That is not an exhaustive list of races and clubs to run with, but those are the main ones. There are some other great individual races you can find, and groups organized on websites like meetup.com. Ask around at your local run shop or with your running friends to get even more ideas if you need! The Outdoor Vancouver website also has an Events Calendar with all the local races.

Karl Woll, born and raised in Vancouver’s Lower Mainland, has been passionately exploring the area’s local mountains over the last decade. Beyond hiking, Karl fulfills his desire to be in the outdoors by kayaking, cycling, scuba diving, snowboarding, and most frequently, trail running. He blogs at Outdoor Vancouver and is the author of The Great Hikes of Vancouver eBook.