There are plenty of things to see and experience in the outdoors around Vancouver but one of the unique attractions along the trails in the region is crossing a suspension bridge. Most suspension bridges in the area are built above raging rivers, some above deep canyons, making the crossing of these bridges a spectacular viewpoint. 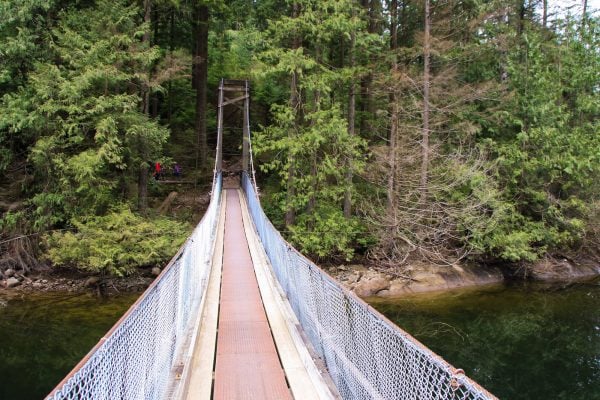 The suspension bridge at the north end of Buntzen Lake.

Located at the north end of Buntzen Lake, the suspension bridge connects the trail along the west side of the lake with the east side. The bridge is located just beyond the north beach area and spans a channel of water between Buntzen Lake and McCombe Lake. Hikers doing the loop around Buntzen Lake or the Diez Vistas Trail will cross this bridge. 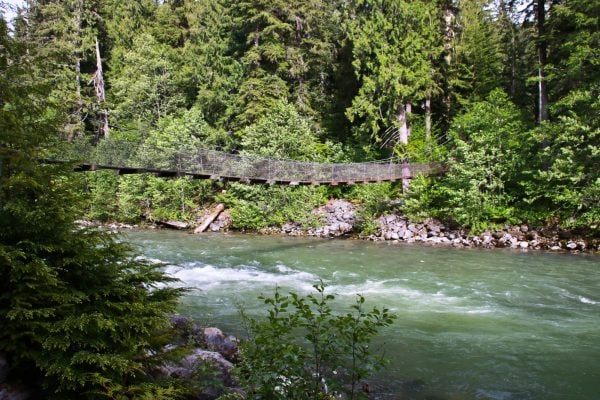 The Cal Cheak Suspension Bridge near the campsite.

The Cal-Cheak suspension bridge is located just south of Whistler at the Cal-Cheak Recreation Site (campsite). The bridge crosses Callaghan Creek and, looking downstream from the bridge, you can see where the Cheakamus River and Callagahan Creek join. The bridge is part of the Sea To Sky Trail and connects the campsite with trails on the west side of the river, allowing people to hike to Brandywine Falls Provincial Park. 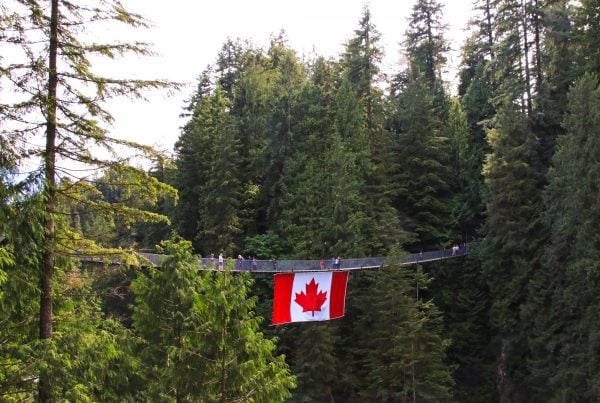 The Capilano Suspension Bridge is Vancouver’s most famous suspension bridge to walk across, spanning the spectacular Capilano River below. The site is impressive as, in addition to the suspension bridge, there are other attractions to explore, such as the Cliff Walk overlooking the canyon and the Treetops Adventure, a series of suspension bridges connected to landings on Douglas Fir trees. The Capilano Suspension Bridge does have an admission fee but it gives visitors a great experience on what the Pacific Northwest rainforests are like without requiring hiking gear or having to venture deep into the backcountry. 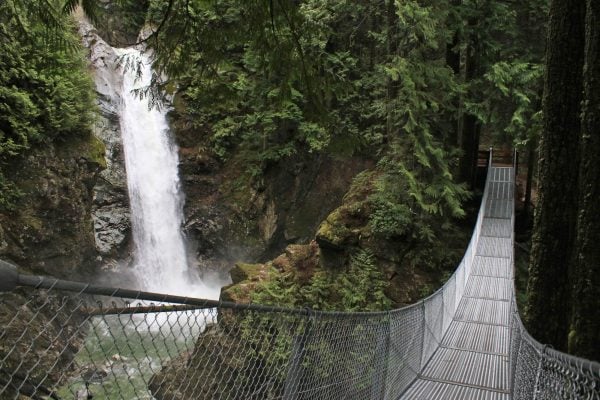 The suspension bridge next to Cascade Falls in Mission.

Located northeast of Mission, BC, the suspension bridge connects two viewing platforms next to the impressive Cascade Falls. While the drive is quite long, the hike is quite short as you can hear the roar of the falls from the parking lot just a short distance up the trail. 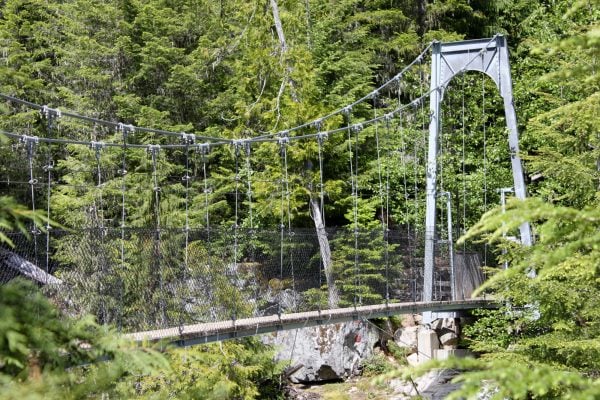 The Cheakamus River suspension bridge in the Whistler Interpretive Forest.

The Cheakamus River Suspension Bridge is located in the Whistler Interpretive Forest and is used to connect trails along the west and east side of the Cheakamus River. The bridge is a multi-use bridge, a bit wider than most so that mountain bikers can also cross from one side to the other. Hikes exploring the Riverside Trail will pass this bridge and another popular nearby hike is the Crater Rim Trail, which passes nearby Logger’s Lake.

The Cloudraker Skybridge at the top of Whistler Peak. Photo by Veronika Hoffmann

Located at the top of the Peak Express Chairlift in Whistler (near the start of the High Note Trail), the Cloudraker Skybridge is a 130-metre long suspension bridge over Whistler Bowl. You will need to buy a gondola ticket to the top of Whistler Mountain (and then take the Peak Express Chairlift) so make sure to make a day of it and explore some of the other trails at the top as well. Added bonus is the nearby Raven’s Eye Cliff Walk with 360-degree views of the area. 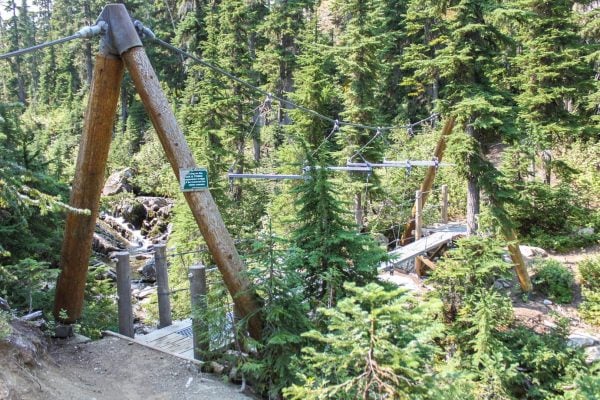 The Gin & Tonic Suspension Bridge near Rainbow Lake in Whistler. 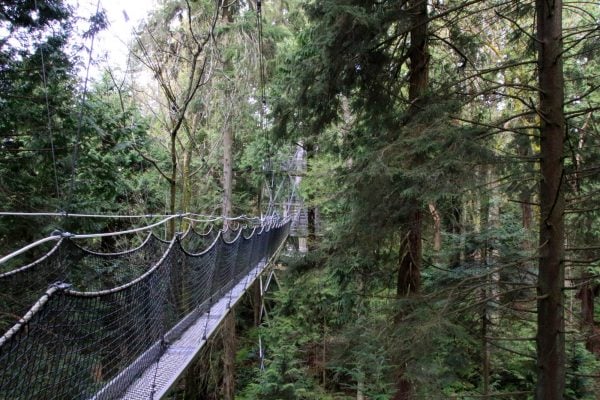 A section of the Greenheart TreeWalk, at UBC’s Botanical Garden, leading to a viewing platform.

Located in UBC’s Botanical Garden, the Greenheart TreeWalk is a 310 metre-long tree top canopy walkway that hangs above the forest floor. The walkway reaches a height of about 20-metres as you walk along the bridges to platforms that hang from enormous Douglas Fir, Cedar, and Grand Fir trees. What makes the TreeWalk unique is it enables you to explore the upper sections of the forest, literally seeing things from a bird’s-eye view. Make sure to join one of the tours that are scheduled three times a day where one of the very knowledgeable naturalists will provide you with extensive information about the forest. 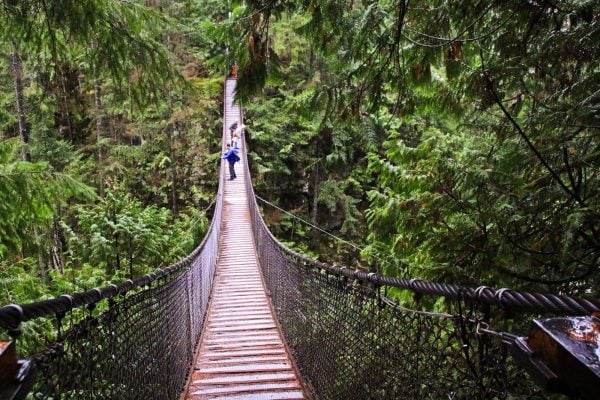 The suspension bridge across Lynn Canyon in North Vancouver is an impressive sight as you cross high above the Lynn Creek below. Located next to the Lynn Canyon Ecology Centre, the bridge connects hiking trails on both sides of the creek, including the popular Twin Falls loop. The bridge is also part of the Baden Powell Trail, a long trail that crosses the entire North Shore. 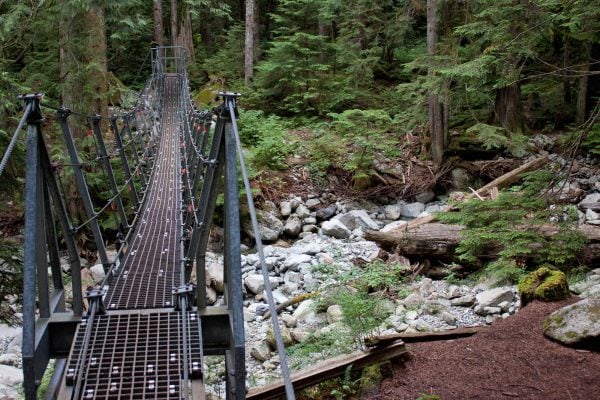 The suspension bridge crossing Norvan Creek is located just down stream from Norvan Falls and is usually referenced as the point of entry into the deep backcountry of North Vancouver. The trail continuing across this bridge heads to long and very difficult trails, such as the Hanes Valley and Lynn Lake, which generally are covered in snow into the early summer months. The bridge is a popular point of interest for those hiking to Norvan Falls. 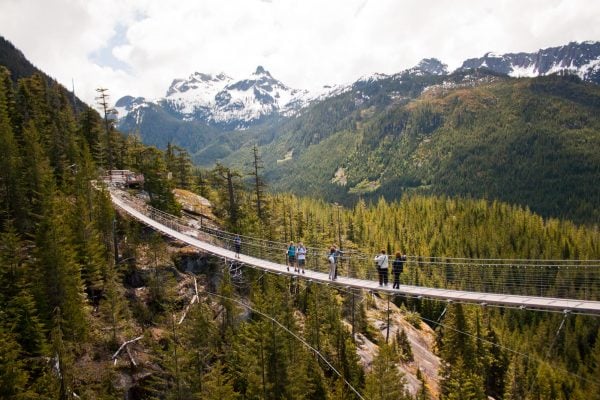 The Sky Pilot Suspension Bridge at the top of the Sea To Sky Gondola.

Located at the top of the Sea To Sky Gondola in Squamish, the Sky Pilot Suspension Bridge is about 100-meters long with incredible views of Howe Sound and the tower Sky Pilot Mountain. This suspension bridge is one of the few that doesn’t cross a river and was built to connect the lodge to a separate viewing platform. Hikers can access the suspension bridge by hiking up the steep Sea To Summit Trail and then taking the Gondola back down for $10. If you’re less inclined to do this challenging hike, you can take the Gondola to the top. 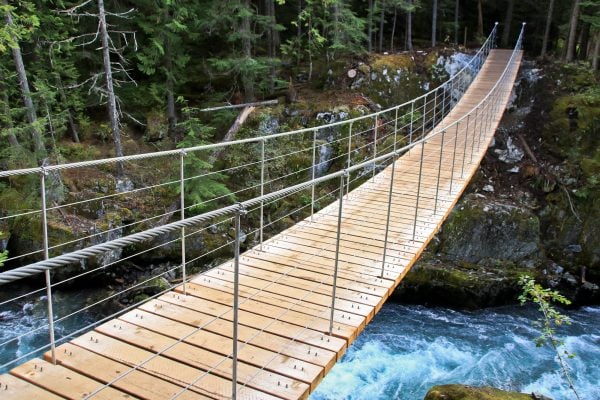 The suspension bridge across the Cheakamus River to the Whistler Train Wreck site.

The bridge across the Cheakamus River next to the Whistler Train Wreck site was built in 2016 to make it easier for hikers to access a piece of Whistler’s history. The bridge has a beautiful design to it, with a metal wheel shape on each side resembling an old train wheel. It’s an easy walk to the Train Wreck site and crossing the rugged Cheakmus River gives you an added bonus of a spectacular view of the rushing river below.

How many of these suspension bridges have you crossed?