The second in a series of reviews of alpine lakes located in the North Shore mountains. Today we look at Mystery Lake on Mount Seymour.

Directions: After parking in the main parking lot on top of Mount Seymour, proceed past the washrooms towards the map kiosk at the end of the lot. Follow the adjacent gravel road past the Mystery Express chair lift, then take a right onto a narrow dirt path. There won’t be any signs telling you to go this way, but don’t worry, this is the right path. Follow the trail past a small pond on your right before heading uphill into the forest. You’ll stay on this trail for the entirety of the hike. 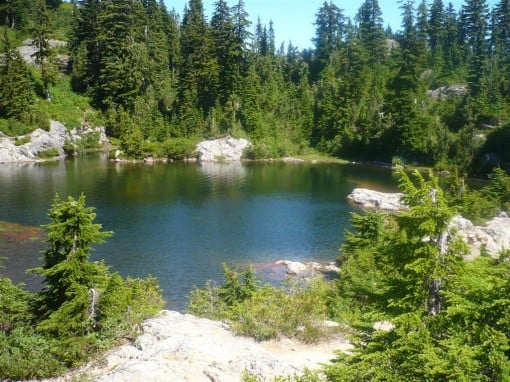 Mystery Lake is about as close to perfect as you can get for an alpine lake hike, especially so for those with small children. With ample space for relaxing on the shores of the lake, warm (relatively speaking) water and an easy ascent, it’s really the ideal hike for a younger hiker, and with a beautiful mountain lake awaiting you at the finish, how can you go wrong?

After entering the forest, you’ll be back out into the open again within minutes. Passing through acres of berry bushes (free samples!), the trail gracefully meanders a mostly flat terrain, with the Mystery Express chair lift visible on your left for the beginning portion of the hike. For the young ones, there are plenty of small bridge crossings to keep them distracted. About 15 minutes in you’ll reach a somewhat steep and rocky ascent, easy for experienced hikers, but a bit tricky for younger ones. A short while later, you’ll pass along some well designed boardwalks that skirt the edge of a small pond (my 4-year-old calls it Yuck Lake; feel free to come up with your own title), then re-enter the forest again.

Another five to ten minutes down the trail you’ll leave the forest for a quick trip across a ski run, now fern-covered in summer and offering fantastic views of Vancouver. Once on the other side you’ll begin to make the final climb up to Mystery Lake, which is now only 10 minutes or so away. Continue to hike upwards (not steeply, mind you) until you finally emerge at the lake’s south side.

There are numerous trails around the perimeter of the lake, although I’ve always enjoyed walking out on a small peninsula that juts out 30 meters or so. Northern Salamanders abound, and the water begs you for a quick dip to wash off the sweat and dust. Hardier adventurers will head to the opposite shore for diving, but relaxing swimming is usually the order of the day, followed by a leisurely lunch. After all, it only took you 40 minutes or so to get here, so what’s the hurry?

If you’re up for some more exploring, head west to the adjacent rocks that overlook the lake for some great views of Indian Arm. If you follow a trail along the western edge of the lake, you can hike all the way back to that same dirt and gravel road you saw at the beginning of the hike. Make a left when you reach the road, then follow it back down to the parking lot to make a nice loop (this is the longest way). Alternatively, you can go back down the way you came (the most pleasant route), or head east for a trail that also reaches the dirt road (the quickest way).

If you’re wondering about the difficulty level of the hike, rest assured that it’s in the Easy category. Earlier this summer, I made the trip with my 4-year-old daughter, and she managed it in great shape. Naturally, the proud dad was brought back to earth when we encountered a young boy at the lake; he was 3, and had hiked it in clunky rain boots. No bragging that day! 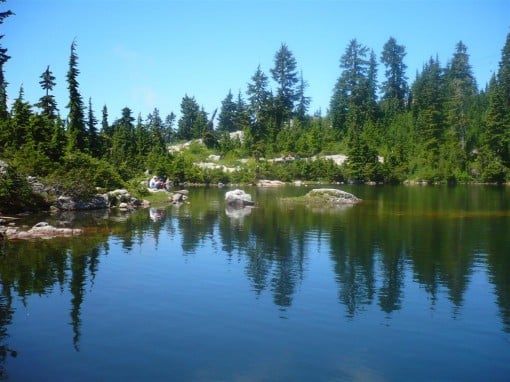 A couple of notes: Mount Seymour is buggier than Cypress Provincial Park, so if you’re going in July or early August, bring some bug spray. Later in summer or in early fall the bugs probably won’t bother you as much. Also, a friend that’s an avid skier cautioned that because Mystery Lake lies below many of the ski runs on Seymour, oil from the vehicles that work the mountain seeps down the creeks into the Lake. I have no idea if Mystery Lake is indeed “oilier” than other lakes as it certainly doesn’t seem to be, but it’s something to consider. (Obviously, pollution is relative; I would hazard a guess that the dirtiest mountain lake is a thousand times cleaner than the waters around Vancouver, or your typical city lake).

All told, those who venture to Mystery Lake will have no doubt as to the origin of the name: The mystery is why there aren’t more people here!