This trail, like so many others in the Lower Mainland, was constructed by the indefatigable Halvor Lunden.  Eventually BC Hydro named the entire 24 Km trail, up Dilly Dally, along Eagle Ridge, and down past Lindsay Lake and Polytrichum Lookout, after him.  He passed away in 2008.  The trails he worked on have deteriorated since.

This is a challenging trail that gets its name from the 10-12 hours it takes to complete – not enough time to dilly dally on the way.  Also, it’s a remote trail as the approach reveals so you won’t meet many, if any, hikers on the way.  Dilly Dally Peak is at 1250 m and the trail head is at 95 m so the elevation gain is 1155 m. The trail is well marked with metal markers and flagging.  I’ve hiked Dilly Dally six times over the years, most recently on 20 July 2013.  As time passes, the trail has deteriorated so do it while you can. 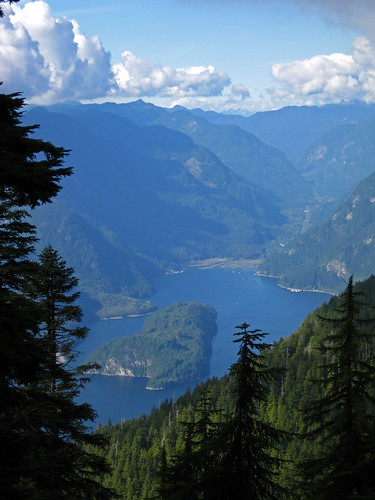 To get to the trailhead, drive to Buntzen Lake parking lot.  You must then walk along the eastern shore of the lake, either along Powerhouse road (shorter) or on the Lake trail (nicer but longer).  At the end of the lake (North Beach) continue on the gravel road, past the trailhead for the Swan Falls trail, to where the road ends at a gate. Go right on a rough gravel road that leads to the tiny settlement of Buntzen Bay. After about 20 minutes on this road, at a bend, you will see a trail sign and flagging on a tree. This dead end road leads to a Hydro pylon.  This is the trailhead. It takes about an hour and ten minutes just to get here.

From the hydro pylon, you go up steeply into the woods, gaining about 40m then losing some as you descend to a creek. In August, an easy crossing because there is no water.  Earlier in the summer, be careful as the water rushes in front of you. Those rocks are slippery – as I found out in May 2012. Then comes an easy half-hour walk on a steady incline to the next creek (I call it Dilly Dally Creek).  There is water here even in August.  (There are a couple of small usually dry creeks between the two major ones). Cross the creek, climb right then go left and you will soon come to the start of an old logging road at 200 m.  You head up quite steeply in a general NW direction for about half an hour, to a trail junction on your left at 360 m. This side trail leads to two viewpoints, one called Croker Lookout (an island in Indian Arm) and the other higher up, which is Little Horn Mountain at 450 m. Don’t try this trail today. 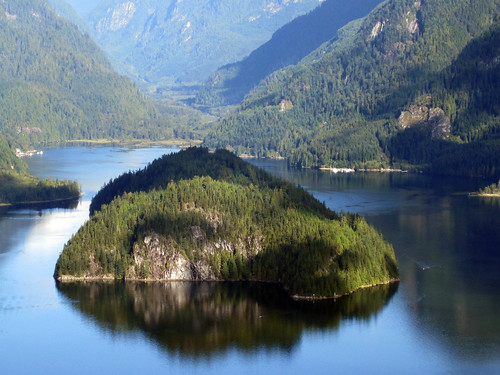 Once you pass the trail junction you find yourself on a rough diversion constructed to avoid obstructions on the road. This diversion was itself badly damaged during the winter of 2012-13 and there are many deadfalls to overcome as you head up to a viewpoint called 157 Lookout. On this stretch, watch for a sharp left-angled bend on the diversion.  If you miss it you’ll go off trail. It takes about 30 minutes to get from the trail junction to the viewpoint, which is at 545 m.

After a rest, continue on the old road, now free of deadfalls, for ten minutes to its end. Now look to your left and you will see a trail that climbs steeply up from the road end and ascends relentlessly.  There is one large new deadfall on this stretch but getting around (or over) it is not difficult. When you come to a ditch, pay attention.  It’s possible to lose the trail here.  Keep close to the trees on your left, descend in and out of the ditch, keep left and go up to where you see a red marker on a tree.  Make for it, pass by, up a bit more then angle down to the rocky (Dilly Dally) creek. Drink all you can and fill your bottle.  If you are coming back this way, it will be 2½-3 hours.  If you descend via Swan Falls it will be about the same.  If you return along the ridge, longer still. The creek is about 30 minutes from the road end at an elevation of 800 m.

Crossing the creek is easy and up to the 900 m marker you gain height comfortably by switchbacks. From 900 m the trail gradually deteriorates. You’ll find yourself side hilling at one point, with the creek far below. You will also encounter a small, muddy ditch that you must leap across. At 1,000 m conditions become quite rough as you approach the pass, The pass itself, when you reach it, is a mess. There’s a huge deadfall which you can either walk along or go up to the right to avoid a huge branch and then come down, making for a tape attached to the end of the tree. You turn right just after the end of the deadfall to leave the pass. From the creek to the pass, which is at 1040 m, is about 40 minutes. 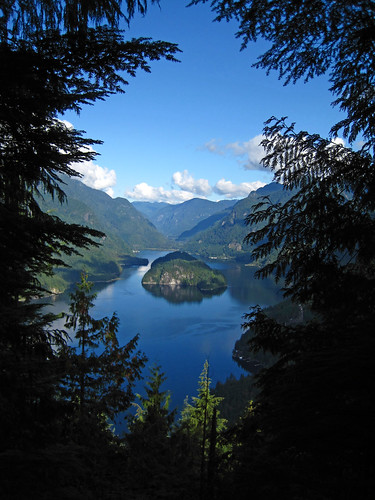 After the pass, you head steeply up. It’s rough until at about 1150 m the terrain changes, you ascend moderately on a pleasant wooded trail, with even a view or two. The last 100m up are quite enjoyable, especially when you see a signpost on a tree ahead. You are at the summit!  Another signpost to the right says “Viewpoint”. There are small trees dotted about but there are great all-round views. The trail itself passes between two rocky outcrops – ideal for your lunch break. It’s about 40 minutes from pass to summit, or around four and a half hours from the parking lot to summit (excluding rest stops).  The summit elevation is 1250 m.

All photos for this post, including the header image, provided by Steve Vanderwoerd courtesy of the Wanderung Hiking Group.

U.N. Randonneur has been hiking the trails of south-western B.C. for 42 years and up to now has done 1,860 hikes in these mountains since he began in September 1973. He also climbed Kilimanjaro in September 1992