Until the Peak-to-Peak Gondola had it’s first summer of operation in 2009 (it opened December 2008), not many people had hiked the trails on top of Blackcomb Mountain. Before this, the only ways to access it were by taking the Solar Coaster Express Chairlift to the top, while skiing was still going on in the glacier area, or face a long, arduous hike up the ski runs from the village.

However, with Whistler Blackcomb actively marketing summer activities on the mountains, this has opened up the trails through Blackcomb Meadows and made it easy to access scenic areas such as Blackcomb Lake and the Overlord Viewpoint. For the average hiker, all of the trails can be completed in a mere few hours, including the black diamond trail, which is more of an intermediate climb, called Decker’s Loop. This video gives a pretty good idea as to what to expect:

The start of the hiking trails is a couple of hundred meters up from the Rendezvous Chalet near the Blackcomb side of the Peak-to-Peak station and the top of the Solar Coast Express chairlift. The easiest way to get to get there from Whistler Village is to take the Wizard Express chairlift from the Upper Village. This will take you halfway up the mountain, where you can transfer to the Solar Coaster Express for the final section.

Once at the top, follow the ridge from Rendezvous, passing the Gondola station on your right, as the trail immediately begins to climb before leveling out and staying fairly flat for the first section. The trails are well marked, with maps of the area at every junction. For those accustomed to hiking in British Columbia, the distances and difficult of the trails are much shorter and easier than the maps make them out to be and it’s obvious that this is by design, keeping the tourist who is unfamiliar with BC terrain in mind. 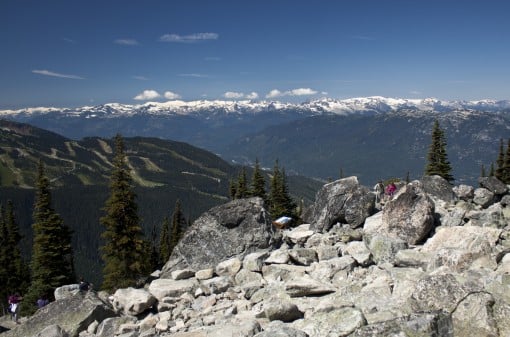 The alpine viewpoint from Blackcomb looking across to Whistler and into the Fitzsimmons Valley.

The ideal route to take is to follow the trail and go left onto the Lakeside Loop Trail, which takes you to Blackcomb Lake. This is definitely one of the highlights of the area, set in a meadow-like area, with rocky mountains tower high overhead, and snow covered glaciers off in the distance. After enjoying some time at the late, continue along the trail and down towards the junction, and go left along the Overlord Trail. Not long after, go left onto the Decker Loop and complete the outer trails in a clockwise route. There are terrific views of the Overlord Glacier, Fitzsimmons Valley, and the trail passes a small lake, which we were unable to determine the name of.

View of the Overlord Glacier and an unknown alpine lake.

There are two side trails, that get very little traffic and start from a 5-way intersection under the 7th Heaven Express Chair. The Tree Line Trail is only open when the 7th Heaven Express Chair is open, which is until around mid to late July when the snow on the glacier has melted and there is no longer skiing. This trail just connects Blackcomb Meadows to the chairlift. The Marmot Trail goes the opposite direction from the Tree Line Trail; uphill. It’s a short trail that offers alternate views of the Fitzsimmons Valley and eventually “fades out” as the trail gets above the vegetation and into the alpine area. It wasn’t clear whether you could, or if it was worth, continueing to hike up the loose rocks to where the top of the chair lift is, so we just turned back and enjoyed the main trails with everyone else.

In terms of preparation, make sure to bring water and never trust the water sources being drinkable along the trails. Also, when I hiked the trail in early-August 2013, there were a LOT of blackflies, so some sort of repellent is recommended. Unfortunately, the terrain is low enough for flies to exist. 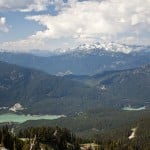 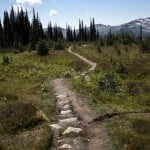 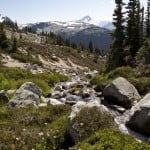 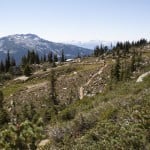 Have you hiked the trails in Blackcomb Meadows?